A look under the cap: the reproductive behaviour of Varroa in the capped brood of the honey bee

In recent years, beekeepers have been worried, when opening brood cells, to discover that their colonies are infested by Varroa. A few years ago, when we opened brood cells, we did it hoping to discover if Varroa was going to reveal some of its secrets. In this article, we would like to share what we have observed. Outside the cell, Varroa females live on nurse bees where they feed from hemolymph. Males do not survive outside the brood. To reproduce, one and sometimes several Varroa females enter brood cells before capping and crawl under the larva. Hidden in the larval jelly, the parasite waits until the cell is capped (fig. 1). The whole reproduction occurs during the bee development in the capped brood. The observation of Varroa’s reproduction in the cell is, however, quite difficult and our knowledge was fragmentary. Therefore we developed an observation method using transparent cells made of polystyrene assembled on a plastic support. This artificial comb was inserted into a brood comb (fig. 2) and put into an infested colony. We covered the cells with honey to induce bees to prepare them for oviposition. With the aid of a grid, the queen was confined for 12 hours to the artificial cells where she laid eggs. Bee larvae were then nursed by worker bees for 8 days, after which some cells become infested. These were removed after capping to an incubator simulating hive conditions (temperature, relative humidity). The incubator was equipped with a binocular microscope mounted with a video and a photographic camera. This allowed direct observation of the cell as well as recording of the Varroa’s behaviour (fig. 3a, b). 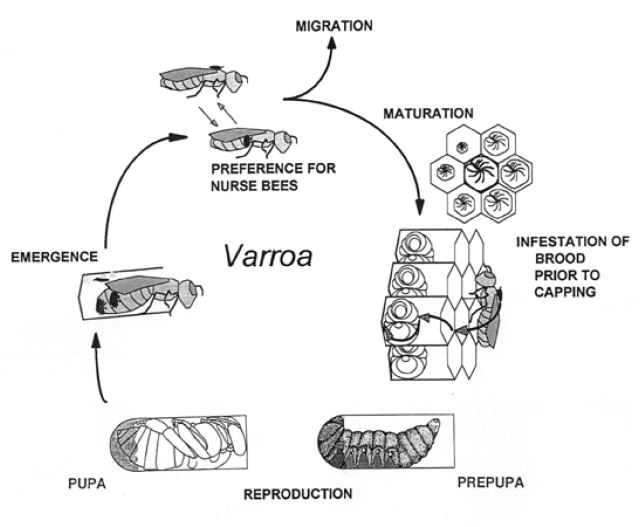 Fig. 1 - Varroa’s biological cycle. Adult bees are parasitised only by Varroa females which have a preference for nurse bees. To reproduce, one and sometimes several Varroa, enter an open brood cell and crawl under the larva. Once the cell is capped, Varroa’s reproduction can start. Each female lays 5-6 eggs and only the first will produce a male. When mature, young adults mate on the faecal accumulation. After the bee has hatched, only adult females survive. The males die in the cell. 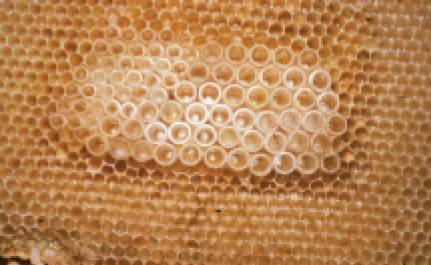 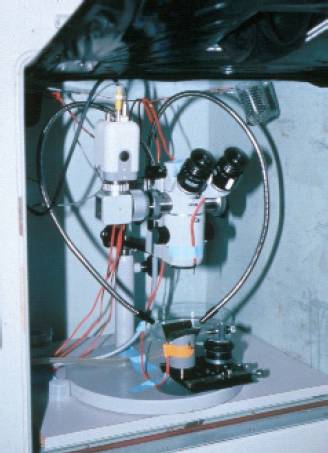 Fig. 3a - The infested cells are kept in an incubator simulating the beehive conditions. One cell is observed by means of a binocular microscope equipped with a video camera. Photo: J. Haettenschwyler. 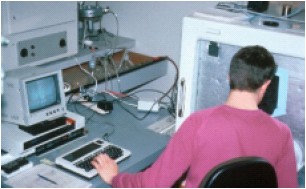 Fig. 3b - The Varroa behaviour is studied on line through the microscope.

From cell capping to pupation

After capping, the bee larva unfolds and eats the remaining larval jelly. Varroa takes this opportunity to climb onto the larva to help free herself from the jelly (fig. 4). The larva spins a cocoon against the cell wall for 33 hours in the worker brood cells or 48 hours in the drone brood cells. While the bee spins its cocoon, Varroa remains on the larva, thus avoiding being trapped between the larva and the cell wall, and feeds itself regularly. The Varroa’s oogenesis (egg formation) begins rapidly so that the first egg can be laid as soon as possible. This time period is critical: Varroa must reproduce within the duration of the capped brood (12 days in worker and 14 days in drone brood). Reproduction stops as soon as the adult bee hatches. 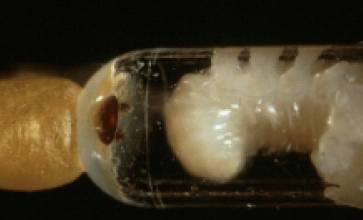 Fig. 4 - After capping, Varroa is still glued in the larval jelly that the larva has just left. Once the cocoon is spun, the larva stops moving and stretches out on its back with its head towards the cell cap (fig. 5b). It has now reached the prepupal stage and occupies only 2/3 of the cell space, leaving Varroa free space in the upper half and the anterior part of the cell (in front of the cap). At that time, the Varroa female concentrates its feces on a little spot, usually close to the bee’s anal zone (fig. 5). Being white, Varroa’s faecal accumulation is easily distinguished and is a sign of infestation. 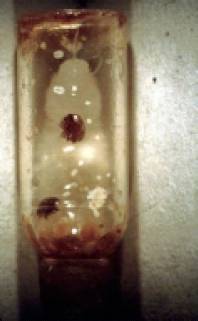 Fig. 5a - A cell infested by two Varroa. The bee is at the prepupal stage. The white spot in the posterior part is the faecal accumulation; two eggs have been laid in the anterior part on the cell wall. One Varroa is on the cell wall and the other on the bee. 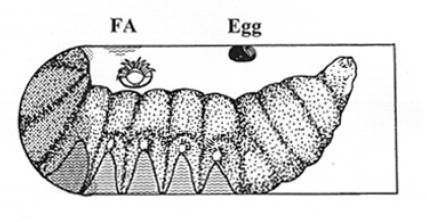 Fig. 5b - Lateral view of a worker prepupa and representation of the prefered sites for building the faecal accumulation (FA) and for laying the first egg.

After cell capping, Varroa progressively changes its behaviour. To save its energy, it becomes less and less active and spends moe and more time (nearly 90 %) up side down, on the feces. It descends onto the larva exclusively to feed itself. After each feeding bout, the mite soon returns to the cell wall where it stops on the feces. It is significant that Varroa never feeds on the head or thorax of the prepupa, but only on the abdominal segments. This behaviour probably prevents the prepupa’s appendages (mouthparts, antennae, wings and legs) from being damaged. Should the bee die or become crippled, Varroa would be unable to get out and would die in the cell.

60 to 70 hours after cell capping, Varroa looks for a site to lay its first egg. Starting from the faecal accumulation, it goes firstly in the direction of the cell cap, then criss-crosses the cell laterally and finally stops at the oviposition site. This is usually situated in the anterior part of the cell and almost always in one of the three upper corners of the hexagonal cells (Figs. 5a, b). It is easy to observe the egg position in an infested colony with a good light and by delicately opening the cells containing prepupae. As the egg emerges from the genital opening, Varroa bears and sustains it against the ceiling of the cell wall with its two foremost pairs of legs. After sustaining the egg for 20-30 minutes, the Varroa female leaves the site, but before leaving, she tests if it is sufficiently stuck to the cell wall. As can be seen in fig. 5a, at the end of the prepupal stage most of the infested cells have only one faecal accumulation site in the posterior part and one egg (worker brood cells) or two eggs (drone brood cells) in the anterior part. One wondered how the mite is able to localise these positions and for which purpose as we have never found feces or eggs on the prepua. Experiments have shown that Varroa differentiates between the chemical composition of the cocoon and that of the bee’s cuticle. Moreover, using cells which have been turned by 180 ° up side down, we could observe that both gravity and the bee’s anal zone are used as stimuli by Varroa. 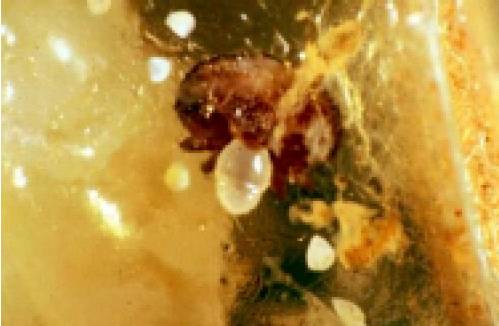 Fig. 6 - An egg emerges from the genital opening and is stuck against the wall. The nymph within the eggshell always has its legs oriented to the cell wall, allowing it to walk.

The first egg has to be protected

The position of the egg and faecal accumulation fulfils the following functions: the faecal accumulation is the favourite resting site of the female Varroa which thus scarcely ever goes to the anterior part of the cell to avoid disturbing its eggs. This is of significance, as the protonymph within the egg always has its legs oriented to the cell wall allowing it to walk away after hatching. Should the egg be upturned, the protonymph would be unable to walk away at hatching and would die.

From pupation to bee emergence

There is another danger for the egg: a major change in the free space available for Varroa occurs when the prepupa moults into a pupa (figs. 5b, 7b). While moulting, the mouthparts, antennae and legs of the pupa emerge and extend backwards which may disturb the egg. Since the egg is positioned at the anterior part of the cell in a corner, these risks are reduced. 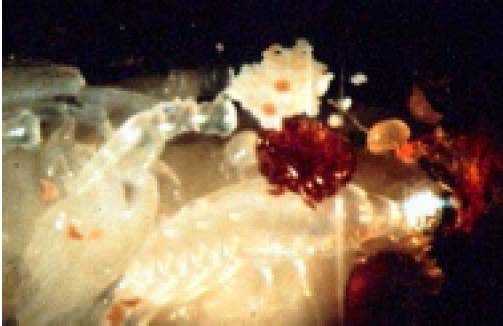 Fig. 7a - Lateral view of a pupa with the faecal accumulation, two Varroa females and an egg on the cell wall. The legs of the third pair have been pushed apart and a protonymph is searching for the feeding site on the pupa’s abdomen. 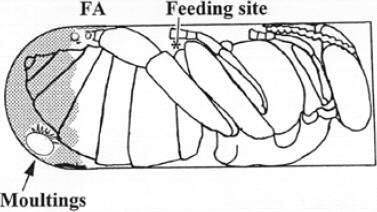 Fig. 7b - Schematic view of the space structuring in brood cells at the pupal stage. The most frequent site for feeding is indicated by *. To moult, nymphs search for a save place away from the active mites. FA = faecal accumulation. 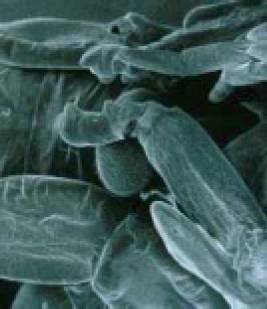 Fig. 8 - A scanning electron microscope view of a Varroa female feeding on the pupa’s 5th segment. The pupa’s third pair of legs has been pushed aside by the infesting female to enlarge the space around the faecal accumulation. Photo: Heinz Bolli.

Aggregation on the faecal accumulation site can be seen as the purpose of space structuring in the cell: the only male of each family must be at the same site as females in order to mate. This may seem surprising in a so little space, but is not, when one considers that the cell is divided in two parts by the body and second pair of legs of the pupa. In other words, if young females and the male were not in the same part of the cell they could not mate in the capped brood cell. Since males do not survive outside the cell these females would remain sterile and unable to contribute to the species’ survival. Eggs are laid every 30 hours and the descendants reach adulthood one after another, the male first. The male is sexually mature when the first female is adult, so that he can mate with her until the second daughter female is mature. Every daughter female is mated as often as possible until a new daughter female arrives on the faecal accumulation site and so on until the bee hatches. As a consequence, Varroa’s reproduction is limited by the duration of bee development in capped brood: 12 and 14 days for worker and drone brood, respectively. This is why Varroa prefers drone brood cells as they have more time to produce more daughter females. 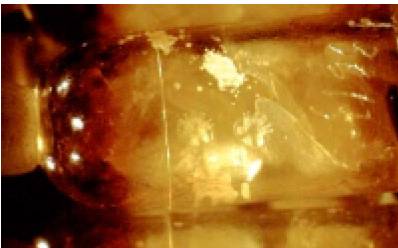 Fig. 9 - Infested drone brood cell. Two deutonymphs have moved aside in a quiet zone to moult. This pupa has a yellow-brown colour which indicates it is older than the one in fig. 7a.

Many beekeepers are fascinated by the exceptional biology of the bee. The next time you open brood cells, you should take the time to observe what lies within: the magic of a species that has wonderfully adapted to brood cell conditions. Unfortunately, this magic causes us a lot of trouble.